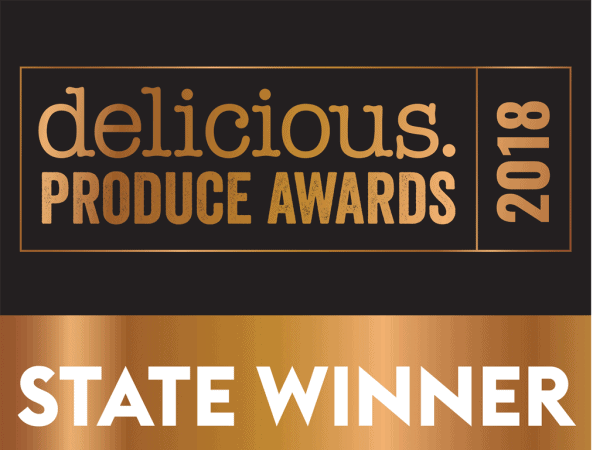 The full list of 2018 delicious. Produce Awards State Winners was revealed today with

The delicious. Produce Awards are a celebration of Australia’s magnificent bounty of

ethical, sustainable and innovative ingredients, and the passionate, talented people

behind them, as nominated by the country’s top chefs and restaurateurs.

Now in their thirteenth year, the delicious. Produce Awards aim to spotlight new and

native products, and consistently outstanding producers who are often the unsung

Today’s release of the 2018 State Winners list is the result of the delicious. Produce

primary produce nominees. The State Judges were tasked with awarding the best of

their state in the Dairy, Paddock, Sea and Earth categories to go through as State

Winners to the national judging phase.

way through hundreds of nominations, debating the most worthy winners for their state.

In 2018 we continue to celebrate new, innovative, native and consistently outstanding

knowledge and regard for the environment. We have several new State Judges this year

and I’m grateful to them all for their time and passion for the delicious. Produce

innovation in the industry. New to the State Judging panels for 2018: Danielle Alvarez

“I was really happy to join the NSW State Judging this year. I have long been an admirer

of the delicious. Produce Awards and the work they do in highlighting the important role

our producers play in making the Australian food industry the world leading industry it is.

We tasted some incredible cheeses, new vegies with so much flavour and amazing

overall category winners, revealed at a special event in Sydney on 13 August along with

Producer of the Year; Best New Product; In the Bottle; Outstanding Region and Farmers’

Following its successful launch in 2017, The Alla Wolf-Tasker Good Food

Matters delicious. Produce Awards Scholarship of $5000 will again be awarded in 2018.

The 2018 State Winners will be eligible to apply for the 2018 scholarship.

For more on the awards head to delicious.com.au/produceawards and stay up-to-date